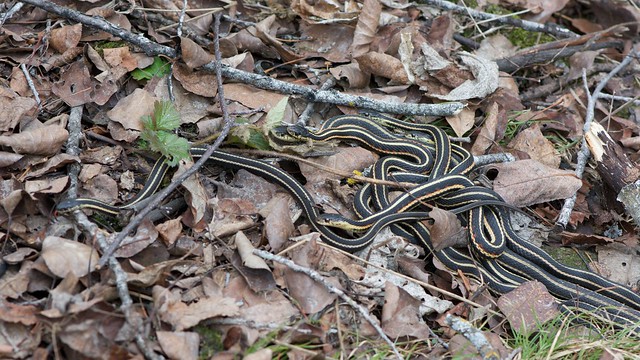 On May 5, 2014, I visited the Narcisse Snake Dens. Located about a hundred kilometres north of Winnipeg, these dens are the hibernation site of tens of thousands of Red-sided Garter Snakes (Thamnophis sirtalis parietalis), the prairie subspecies of the Common Garter Snake. When they emerge each spring, they’re something of a tourist attraction, one that gets featured in the Canadian media. I don’t know how many government-supported tourist attractions there are in the world that are dedicated to snakes and snake conservation, but there can’t be many, and this is one of them.

For anyone interested in garter snakes, or even snakes in general, the Narcisse Snake Dens are a must-visit. Every spring, the garter snakes emerge ready to mate. A single mating ball — a large female surrounded by anything from several to dozens of male suitors — is impressive enough, but when thousands are out and about in the same location … well, you’ve never seen snakes so thick on the ground.

Why Do Garter Snake Keepers Like Garter Snakes?
Articles, 31 May 2013 In which I come up with some reasons why some reptile keepers might prefer garter snakes over other snakes. »
Why Don’t Reptile Keepers Appreciate Garter Snakes?
Articles, 9 Jan 2013 I look at some of the reasons why garter snakes aren’t more popular among reptile keepers. »
Keeping Garter Snakes Outdoors
Questions, 24 Aug 2012 Recently I’ve received a couple of questions from readers who want to know about keeping garter snakes outdoors. Now I understand that this is actually done in Europe: garter snake keepers there set up these elaborate backyard facilities to house… »
‘That Reptile Smell’ and Beginner Garters
Questions, 18 Jul 2012 Jack writes: Hi! I’m 13 years old and am looking into getting a garter snake. I have a suitable enclosure and equipment and can provide food, read your care guide along with some others, and there is now just one… »

One of two men charged with tossing a garter snake in a Saskatoon Tim Hortons restaurant has been given a six-month conditional discharge. His co-accused failed to appear at a hearing and is wanted by police. The snake, a Plains Garter Snake dubbed Outlaw, was released into the wild. (CBC News, Global News)

Garter snakes aren’t native to Newfoundland and Labrador, though a population of them seems to be persisting on the southwest coast of Newfoundland (1, 2). Last month, though, a live garter snake was found in a St. John’s suburb — on the other side of the island. When wildlife officials went looking for it later, they found the snake dead.

About 250 Plains Garter Snakes that were removed from a house near Regina, Saskatchewan last fall were finally released over the weekend (see also). The snakes had spent the winter at a wildlife rehabilitation centre.

Disturbed B.C. Garter Snakes Released at Den Site
News, 23 Mar 2015 The garter snakes whose hibernation was disturbed last month by dike repair have been returned to the den site at Boundary Bay in Delta, British Columbia, where they’d normally be emerging from hibernation at about this time…. »
Garter Snake Hibernaculum Disturbed in B.C.
News, 28 Feb 2015 Construction work on a dike in Delta, British Columbia has disturbed the hibernation site of hundreds of garter snakes, CBC News and Global News report. The snakes, which reportedly include Wandering, Puget Sound and Northwestern Garter Snakes (the news photos… »
Sask. Man Tosses Snake in Restaurant
News, 9 Dec 2014 Saskatchewan again, for some reason. A man arguing with staff at a Tim Hortons in Saskatoon pulled a garter snake from a friend’s coat and threw it behind the counter. The staff fled; the two men were apprehended and face… »
The Evolution of Garter Snake Toxin Resistance
News, 18 Nov 2014 New research into newt toxin resistance in garter snakes explores the DNA of the snakes’ sodium channels: while western garter snakes have evolved TTX resistance in their muscle channels, all garter snakes, even eastern snakes who encounter newts far less… »
Snakes Swarm Saskatchewan
News, 10 Nov 2014 That snakes turn up in people’s basements at the onset of winter is a known thing, but a house near Regina, Saskatchewan has had a few more than usual. Last month it was reported that 102 Plains Garter Snakes had… »
Garter Snakes Threatened by Fire, Grazing in U.S. Southwest
News, 10 Nov 2014 A couple of items on garter snakes at risk in the U.S. southwest. Last month, the Arizona Daily sun reported on the impact of serious wildfires in Arizona and New Mexico on the endangered Narrow-headed Garter Snake (AP story; see… »
Giant Garter Receives 140 Acres in Mitigation
News, 9 Nov 2014 Due to mitigation rules for endangered species, 140 acres of habitat, including 60 acres of new wetland, is being set aside in San Joaquin County, California, for the Giant Garter Snake, the Stockton, California Record reports. Those 60 acres will… »